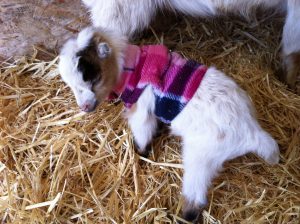 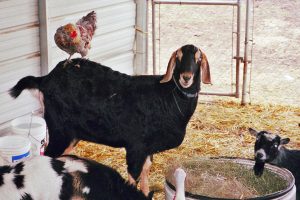 Here’s  Cole , the Nubian goat, and Robespierre, the rooster.  The owners of Cole did not want to sell him at auction for slaughter, and since they had heard that the Merciful Maiden Critter Haven helped friendly goats, they called.  Cole is quite a friendly character, and Robespierre, the rescued pet rooster agrees.  He habitually sits on Cole for the ride.  Cole is so good-natured that he almost enjoys Robespierre’s antics.  What a pair! 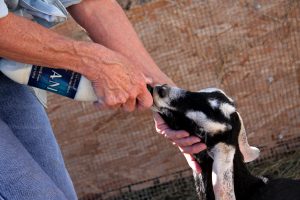 At this time of year, Merciful Maiden Critter Haven gets many calls to help motherless baby goats and lambs.  They must be bottle-fed on a regular schedule. In  Ollie’s case, his mother died en route to slaughter.  Ollie and his baba ( bottle) are such a joy!